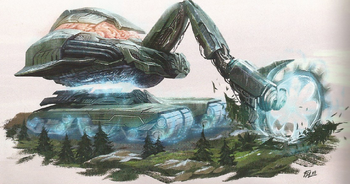 Dread Excavators are massive constructs that destroy any nearby structures.

When the distinctive silhouette of a dread excavator lurches over the horizon, it's high time to evacuate. Almost nothing can prevent the inexorable advance of these vast wrecking machines whose external metallic shell shelters a pod of organic soup that serves as the creature's brain. Its enormous central arm is tipped with a spinning wheel lined with diamond teeth - booth a blade and a siphoning scoop that can breach literally any material. Its massive wheels are webbed together by a tread composed of virtuon particles, thus allowing it to cling to any surface, even that of water or the sides of much larger structures.

A dread excavator can reach heights of 300 ft. tall and long, and the toothed disc at the end of its central arm is 70 ft. in diameter.

Dread excavators are sometimes found disassembled into lone sections, quiescent. Which is how they should be left. If any one section is activated, it begins the process of finding the other sections, reassembling and repairing itself over the course of several months. Once it finishes, it moves toward the nearest intact assemblage of structures and begins its job of wrecking and excavating.[1]

Speed defense as level 7 due to both size and speed

Dread excavators prefer to focus on walls, buildings, and installations, but they will defend themselves if directly attacked by foes. A dread excavator can attack foes up to a very long distance away by telescoping the length of its central arm and bringing down the spinning, toothed wheel to inflict 15 points of damage on all creatures and objects within an area a short distance across. If targets caught under the wheel successfully defend, they suffer 8 points of damage instead.

A dread excavator can also be treated as a level 6 rampaging beast.

If communication can be established with the organic soup that serves the role of the creature's brain, PCs might be able to negotiate, but only if they offer a target that seems an even more tempting place to demolish than whatever the excavator currently has its sights set on.

A dread excavator is a threat that has the potential to destroy any community, regardless of its size.

The salvaged remains of a dread excavator can yield 3d100 shins, 1d10 cyphers, and 1d20 rolls on the Iotum Result Table.[2]