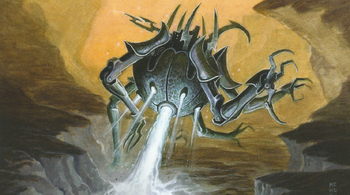 Disassemblers are mechanical creatures that reside within the Ninth World.

A disassembler is a strange-looking artificial creature of glass and steel with 6 spindly metallic arms arranged around its circular midsection. Its upper held is all glaring green lights and mechanical protrusions, some of which might be sensory mechanisms. Its lower half is a broad engine that allows it to hover about 3 ft. off the ground. If it landed, the disassembler would actually be about 8 ft. tall.

Disassemblers are artificially intelligent automatons that seem to went mad at some point in time. Now they tend to act erratically - sometimes attacking creatures, other times simply disregarding them, sometimes destroying what they come across, other times wandering aimlessly.[1]

Disassemblers travel alone or in pairs and can be found anywhere.

A disassembler's arms end in tools that allow it to take apart inorganic matter on a molecular level, turning solids into liquids and gas. Obviously, this ability makes it an effective combatant against automatons and the like. A disassembler inflicts 10 points of damage against any inorganic foes. In addition, a disassembler can destroy an enemy's weapons or armor simply by touch, which is usually its initial strategy against organic components that are armored or armed.

The creature's eponymous tools can't affect organic matter, however, but this limitation might've been programmed into it - perhaps as a type of safety mechanism - rather than an inability. A disassembler with this prohibition removed would become a true terror.

Disassemblers are intelligent but also erratic to the point of insanity. They understand speech and, after listening to any language for a period of time, can often speak it in a very basic way. It's possible to converse with one, but the creature is just as likely to attack without provocation, perhaps in the middle of a conversation. still, a well-spoken, intelligent, and quick-witted character might be able to figure out what a disassembler wants (at the moment) and convince it not to attack or perhaps to do something to aid him.

In old ruins or amid ancient complexes, disassemblers make for excellent encounters with unpredictable outcomes.

The remains of a destroyed disassembler might hold 1d100 shins, 1d6 + 1 cyphers, an oddity, and perhaps even a salvageable artifact.[2]