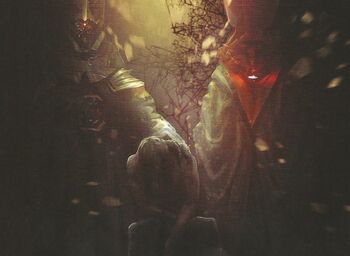 Dhizrend is a death-realm inhabited by syzygy, also known as "ghouls".

If solid ground does exist in the limited dimension of Dhizrend, it lies beneath layer upon layer of bone dust, bones, decaying corpses, mountains of skulls, and naked arches made by rib cages of vast, long-dead creatures. The sky is a mist of grey fog lit with constantly falling burning red embers. Here and there, lone humanoids - abhumans called the syzygy - shamble about. These beings who've sometimes founded colonies on Earth are called "ghouls", "eaters", "undertakers", and the "Night Singers," the latter due to the dirge-like songs they sing while they gather. the syzygy claim to hold dominion over the remains of all humans and abhumans, even if they rarely assert that privilege.

The syzygy that live throughout Dhizrend are divided into castes. The feeders are the lowest, and scavenge the bone plains for whatever scraps they can find, or pull from intermittent doors leading to Earth. The keepers are charged with retaining syzygy lore in huge libraries filled with winding scrolls printed on vellum pressed from the skin of the dead. And finally, the archons are the eldest, and rule Dhizrend as unopposed dictators.

The archons reside together in a castle made of petrified bone. Each wears a unique costume that often incorporates cyphers and the preserved remains of long-dead humans. Though normally absorbed in individual studies of extremely rarified tropics ranging from the thresholds of pain, effects of disability, philosophy of measurement, and topics hard to actually describe, the archons gather once every thirty-three days for a feast. Unlike the practice of the feeders and the keepers, the archons indulge in consuming the living flesh of a few unlucky dimension walkers who found doors into Dhizrend. Captives are held beneath the archon castle until the day they're eventually eaten. Captives are rarely shown mercy, because the archons, as self-appointed leaders of the syzygy, don't wish for the secret of Dhizrend's existence to become known to the Ninth World.[1]