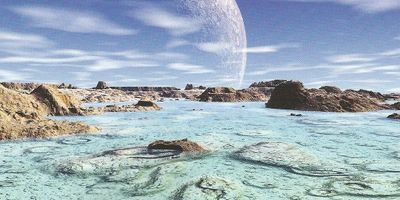 The Dead Reality is a parallel dimension, devoid of any evidence of life except for a single, mysterious temple.

This is appropriate because, for the most part, almost nothing lives in this entire dimension. Little evidence of prior world civilizations exists, and out in the night artifacts of other civilizations are absent. There aren't any ruins;rather, it's as if there was never any life in the first place that could've evolved to fashion a civilization.

However, a single miles-high structure can be found on Earth, under a bloated moon. This utterly white, apparently seamless structure seems to be built o some kind of slick, white synth that resists most attempts to gain entry.Because everything else on the planet (and in the surrounding universe) seems dead, the dimension walkers that have happened upon the structure in the past named it the Temple of Death.

In truth, however, there isn't any interior. Any effect sufficient to discovering this fact actually "wakes" the entire structure, revealing itself as a frighteningly-large automaton designed for only one thing: eradicating all life everywhere. Luckily, it seems trapped inside the dimension. If it ever escaped, its ability to destroy life within planetary ranges and its near-indestructible hide would prove an extreme danger to any other dimension.

From time to time, creatures seeking the universal manifestation of death, or even those seeking solitude, arrive in this dimension. But they never stay long. Some subtle influence (perhaps emanating from the Temple of Death) eventually turns the strongest bodies and minds in on themselves. If sickness, decrepitude, and weakness don't do the job, entities who spend more than a few days inside this dimension sometimes commit suicide. Though, not every creature is so affected.[1]