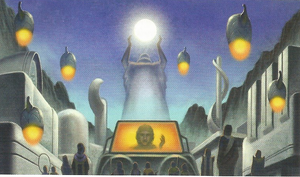 Curtaris is a religious city within the Black Riage.

It's hard to find, but if you go looking for it, you might find a long box canyon on the eastern edge of the Black Riage mountains. At the end of the canyon stands an enormous statue of a vaguely human figure. Holding his hands above his head, the seated man appears to be holding the sun aloft in the sky. In fact, a visual distortion field makes it seem that the sun always appears in his hands, regardless of the time of day or even the weather. At night, the figure appears to be holding the moon, which is always full.

About three hundred years ago, people came to the canyon and discovered the massive stature, which rises 400 ft. into the sky. They call it Curtar and built their community around its base. To the hardy and faithful folk of this city, Curtar is the creator of the universe and the bringer and sustainer of life. Most of the 3,000 people of the town, Curtaris, belong to this cult and spend their lives trying to enact the will of their god.

The people of Curtaris are forbidden to leave the canyon. The doctrines of Curtar state that any straying from the canyon will be cursed with a horrific plague, which means that any who do sneak away can never return. But few people ever try to leave. They remain in Curtaris their whole lives, growing their food and creating whatever they need.

Somei is the leader of both the city and the cult. Extremely intelligent and capable, she's faithfully devoted to Curtar and the community.

In the main square of Curtaris stands a massive synth screen, measuring almost 15 ft. across. From a panel in her chambers, Somei controls the images that appear on the screen, broadcast for all to see. She uses this to convey information to the populace as well as conduct religious rites with the entirety of the population at once, every morning at dawn and every morning at dusk.[1]