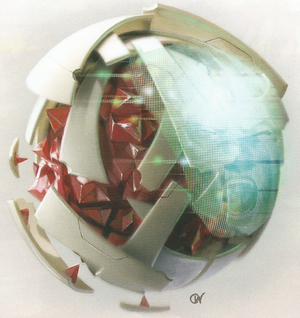 Cuiddits are mechanical creatures found within the Ninth World.

Explorers salvaging cyphers, artifacts, and iotum sometimes stir up entities that behave erratically but aren't immediately dangerous. Some observe, flee, or ignore explorers who ignore them in turn. A few, such as the cuiddit, seem determined to offer their aid, once communication becomes possible.

A cuiddit is a levitating sphere, not quite as large as a human head, made out of synth and crystal. Images in light play across its surface - sometimes images of a face (though never the same one twice), other times of random, odd scenes or objects. Sounds also constantly trickle from the cuiddit - tinkling or booming, cacophonous or melodic, familiar or utterly alien.

When it notices other creatures, it begins to follow them around until it's either destroyed or driven away. At first, those being followed might appreciate the aid that a cuiddit can provide. But eventually, they may grow tired of the light show and incessant sounds, not to mention potential treachery.[1]

Stealth as level 1 due to constant flashing and noise. Speed defense as level 5 due to size.

If attacked, the creature responds by ramming targets with its own body. Despite no having any visible limbs, a cuiddit has the ability to extend fields of force in order to manipulate objects around it, to create barriers, or even to create translucent solid objects of force that could fit within a 10 ft.cube. It might use such a barrier to fence out foes of companions it has just started to follow, but later it could block off an escape for those same companions.

Sometimes people feel like they begin to understand a cuiddit's sounds and images by interpreting them depending on the context. Whether they really do understand or are just fooling themselves is up for debate.

An oddity discovered by a PC activates and is revealed to be a cuiddit.

The remains of a cuiddit can be salvaged for one or two cyphers or even 2 units of iotum.[2]