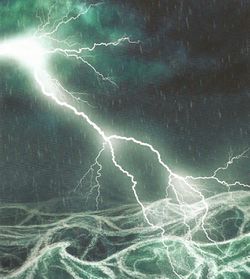 Criustos is an acidified, electrified dimension.

A roiling blot of acidic clouds above an endless sea of fizzing liquid, Criustos is known only to a few dimension walkers who've deified warnings encoded in ancient machine memories. Though not infinite, the dimension of Criustos is larger than several worlds combined. Only the thin interface of clear air between the clouds and sea is capable of supporting life, if the titanic electrical blasts can be avoided.

The farther one travels across this dimension, the more likely the effects of the plane begin to manifest.

First, some physical objects and creatures from other dimensions gradually become immune to the electrical blasts, and as they do, their skin and flesh becomes more and more dense and silvery. Once a creature is completely immune to the electrical discharges, it becomes immobile and as lifeless as a statue, and unless somehow kept afloat, sinks into the strange liquid that isn't water until it's lost from sight.

Simultaneously, visitors to the dimension begin to attract electrical wisps and trailing globes that may at first be mistaken for odd phenomena. However, each is actually a creature called a galvak. Galvaks may simply flit about and play, or for reasons all their own, eventually decide to electrocute the intruders until they leave or perish. Galvaks are particularly drawn to objects or creatures composed of metal.

Drifting around on the surface of the sea is a floating prior-world city that seems pristine other than being completely empty. A few dimension walkers who found themselves in Criustos have settled here, and have set up silvery statues of their comrades who fell victim to the transmutation effect. Because the galvaks don't come to the city, it's relatively safe. The leader of these dimension walkers is a human woman named Darsenia, who shaves her black hair each day with a flat razor which she also uses to slit the throat of anyone who gainsays her leadership. With some effort, the survivors - about seven altogether - have managed to get some of the mechanisms to produce foodlike substances, but everyone is malnourished. It's entirely possible that there were more survivors before, and that Darsenia and the others had to eat them in order to survive.[1]