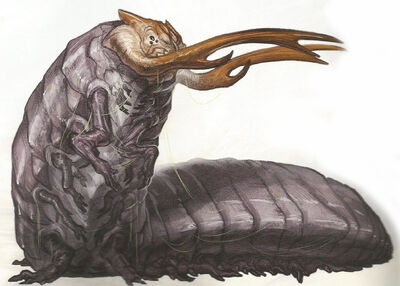 Crawling Ones are insectoid, ultraterrestrial creatures from New Yenth.

Crawling ones have purple and grey carapaces, slippery with oil and mucus. Their heads are only vaguely human-like, with mandible-like arms melded with great cleavers hung on a thick, centipede body with dozens of feet, each foot containing its own smaller "foot" shaped like a human hand.

Cruel, crazed, and hungry, crawling ones are the second life stage of the humanoid people of New Yenth called colrathi to live long enough to be transformed into crawling ones, the creatures are rare. When they emerge (usually by colrathi oversight), crawling ones retreat to locations just far enough from colrathi settlements that they can sneak back at night to hunt.[1]

Short on land; immediate when burrowing

Climb as level 6, perception as level 3, resisting being knocked down as level 7.

A crawling one attacks with their weird, arm-like mandibles. If they hit, victims are grabbed and held while the crawling one's mouth bites and chews until the victim's dead. It can hold and attack only one creature at a time. Each round that held a creature doesn't escape, it suffers 5 points of damage.

Crawling ones retains elements of their former colrathi life stage, including a particularly insidious intelligence. They can still speak, reason, and recall past associates. But they are hateful and noisome, and seem even more interested in destroying their forbears' civilization rather than preserving it. IF more than one congregate, sometimes they talk of future events, such as the coming "reckoning."

A crawling one emerges on Earth via the portal in Yenth, and begins to hunt the abhumans it finds there.

A few crawling ones carry one or two cyphers.[2]