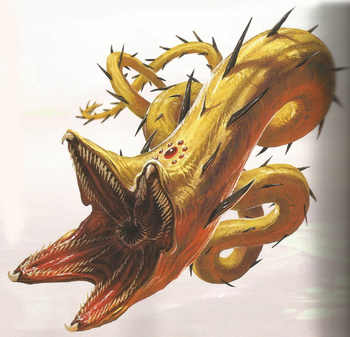 Cragworms are deadly serpents found within the Ninth World.

A cragworm is a spined serpent that can grow up to 50 ft. in length. Its mouth opens horizontally and holds many rows of teeth. Dwelling in abandoned or isolated areas, it preys on whatever it can find. The creature has many red, glistening eyes and is known for its terrible, mournful howl. It has the intelligence of an animal and the outlook of a predator.[1]

Hides in rocky terrain as level 7. Speed defense as level 5 due to size. Perception as level 4. Resists trickery as level 3.

A cragworm hides amid rocks and ruins. While hiding, it howls, and the subsonic nature of the sound paralyzes anyone within long range. Victims who fail Intellect defense rolls are paralyzed for two rounds.

When the cragworm emerges from its hiding pace to attack, its envenomed bite inflicts terrible damage. Victims who fail Might defense rolls move one step down from the damage track.

Once a Cragworm enters combat, it will fight to the death.

Cragworms just can't be reasoned with. They can be intimidated or tricked, but the latter is far easier than the former. They're also particularly easy to fool if food's involved.

Cragworm attacks are seemingly random wilderness encounters that usually befall unsuspecting travelers. In many ways, they're the archetypal wasteland beasts of the Ninth world, giving rise to sayings such as "fierce as a cragworm," "temperamental as a cragworm," and so on.[2]