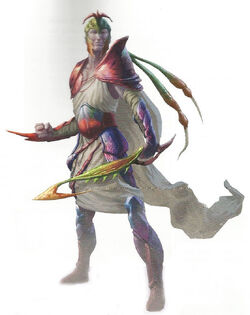 The Colrathi (Singular: Colrath) are a humanoid race native to the realm of New Yenth.

Colrathi superficially resembles human beings, although they are all hairless and have a faint purple luster to their skin when exposed to bright light.[1]

The colrathi speak their own language which consists of clicks and whistles. It's very difficult for native speakers of the Truth. Most colrathi that live in the trade settlement located on the opposite side of the transdimensional gate will speak the Truth, though a deeper understanding will often elude both species. Human and colrathi thinking seem to fundamentally be at odds with each other. For example: most colrathi think nothing of biting a foe (as opposed to striking or kicking with either a fist or a weapon).

Colrathi are born from iridescent eggs, one of dozens that are laid by a pregnant mother during any given year, and which are then deposited into hot-spring heated chambers. Hatchlings are given into the care of colrathi who are specialized in child rearing. Until the age of 5, colrathi are cared for as they grow up. But at the age of 6, they're then assigned to an order, usually happily so. Colrathi recognize several hundred orders, including Herders, Growers, Gatherers, Child Rearers, Watchers, Warriors, Traders, Waste Handlers, etc. The training a colrathi will undergo depends upon the particular order they're selected for. For instance: Warriors will prune their ranks with occasional fights to the death. Healers will study palliatives, how to prepare various insect parts to create drugs, and how to tend to other wounded colrathi.

The Census Takers are an especially important order. They will record and track the age of every living colrath. At some point during a colrath's 44th year of life, Census Takers will send forth messengers with reminders that its time to settle their affairs. Afterwards, the Census Takers will arrange for a small festival called the Forty-Four at which the aging colrath is the guest of honor. After a mixture of song, food, and entertainment, alongside a few speeches from family and friends, the celebrant is provided with an elaborate glass filled with an effervescent liquid called the Water of Salvation. This imbiber of Water of Salvation is then overcome with joyful visions while the poison itself begins killing them. The Census Takers lead the Celebrant out while they're still feeling the rush, and deal with the body afterward. The deceased are not interred or burned but embedded in columns of amberlike material and set on display along thoroughfares, on rooftops, and in other places where they can be seen, posed in a lifelike way (though never in the trade settlement, because it would disturb humans). After about 30 years, old memorials are retired, when no one left alive recalls the name of the memorialized.

The importance of the Forty-Four is implicitly understood by all colrathi. Any colrathi that live into their 45th year will almost inevitably undergo a metamorphosis, becoming monstrous, voracious version of their former selves called crawling ones. Despite their vigilance of the Census Takers, crawling ones will still mange to emerge from time to time. Colrathi view the existence of crawling ones with extreme shame. Crawling ones that survive usually find each other in the wastes, and will sometimes even infest ancient structures there known as the Encysted Tombs.

Colrathi use amber coins as currency, though any that live within the trade settlement closest to the portal, among other communities, will use shins as well. Each order provides its members with basic housing, food, and clothing. An order may distribute additional currency if the need is perceived or if times are plentiful. Most colrathi consume a variety of dishes, though each community tends to an insect swarm of some kind, which is used as a basic staple. Most food swarms are made up of thumb-sized black fly-like sects that buzz around and clump together to form crawling balls. Colrathi weapons are usually made from the mandibles of large insects, but are sometimes actually masses of living insects that are bred for fighting purposes.

A colrath's name includes their personal name, their order, and their age. For instance, Janter Weaver Twenty-Nine weaves wonderful tapestries and colorful ropes, while Rathar Hunter Forty-Three provides food for the trade settlement, and now looks forward to his Fourty-Four. In rare cases where a colrath will choose to put off their Fourty-Four, an individual may run off to a new settlement and change their name by pruning a few years off their age.

No obvious central ruler oversees the colrathi communities as a whole. Each order, instead, oversees the activities within its own remit, and things have worked out well overall. If a fresh need is ever perceived or an unforeseen disaster destabilizes or kills of all the members of a given order, volunteers from the most closely-related orders perceive the need and will shift focus. Most orders will keep records, which means that starting an order form scratch isn't impossible, but generally, it's a shift to a related order. The inception of a completely new order, however, is much rarer.

Recently founded orders include Importers, Ambassadors, and, most intriguingly enough, the Numenera Users. The Numenera Users arose from the much older Tinker order, once it became perfectly clear that the unique devices made by the Tinkers were of interest to people from the other side of the gate. Devices found within the Encysted Tombs and other ancient locales (where crawling ones will tend to congregate) are also of interest, and the Numenera Users do whatever they can to learn more about them.

The order of Importers arranges for the trade of oddities in return for plants, animals, and other substances from the Ninth World. To the colrathi, such objects are exotic simply because they don't stem from insects.

Finally, there are the Ambassadors, who attempt keep relationships with Ninth Worlders cordial, by focusing on ways that humans and colrathi are alike, while also discouraging exploration of differences. For instance, Ambassadors downplay the odd fear that humans seem to have of colrathi infiltrators coming through the portal and secretly living among them.

A few colrathi do decided to duck their Forty-Four celebrations by sneaking through the gate and taking on a human guise. They hope that by living within the Ninth world, they'll avoid transforming into crawling ones. For instance, a leatherworking shop owner in Yenth called Nariive was a colrathi warrior once upon a time. Nariive is just a few months from his Forty-Four. Only time will tell if his hope of fleeing into another dimension to avoid transformation will ring true.

Every colrath spends at least 10 minutes a day meditating, though sometimes for much longer. The colrathi see meditation each day as important as sleep. Unlike sleep, however, colrathi meditation is a focused discipline of mindfulness, where the practitioners will specifically imagine each and every potion of body, no matter how small moving to the next. This, so they say, anchors them to the world. It's why, some believe, that the colrathi are alone in New Yenth in having no carapace. A few colrathi (perhaps wrong-headedly) believe that meditation master might even be able to prolong the final life stage that afflicts the race indefinitely. Most colrathi will use small items crafter by the order of tinkers to aid in their meditations.[2]

A mantis sword is a medium weapon that's actually alive. A wielder who hits with hit and succeeds on an Intellect task inflicts 1 additional point of damage when the mantis bites.[3]