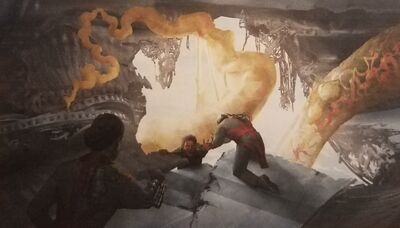 Cloud Volii are massive, aerial predators that hunt after soarcraft.

Enormous predators of the air, cloud volii descend from above to attack an entire village at once with long, translucent tentacles that carry a terrible sting. From far away, one of these biomechanical creatures looks like a hazy spot in the sky. Closer, it becomes clear that it's a mass of hundreds of slowly churning arms waving about a dark central core. The floating beast is 100 ft. across.

Most infamously, cloud volii attack the soarcraft of Corao, ripping them open to get at the fleshy internals of the ships alongside the creatures within. No one knows exactly how the volii can fly, but nothing will seem to ground them. Even a deceased specimen floats in the air where it died.[1]

The touch of a cloud volii's tentacle can paralyze an organic creature that fails a Might defense roll. The victim goes limp for one minute, during which time it's probably pulled into the central core and devoured. As a single action, a cloud volii can attack all creatures within short range with a tentacle. Alternatively, it can stretch outward and attack up to three creatures that are within long range.

If cloud volii are more intelligent than mere animals, they hide it well.

The PCs are traveling aboard a majestic soarcraft when an alarm sounds and all of the personnel inside begin running frantically about. They're under attack! The craft lurches as a hole is torn in the hull, and tentacles begin worming their way in.

The core of a cloud volii will contain 1d6 organic cyphers and perhaps even an artifact, suggesting that they're not natural creatures at all, at least in origin.[2]

A cloud volii might move into a flock of flying birds and devour them all, or it could lower itself into either a forest or lake and grab all of the animals or fish it can in one terrible moment.[3]