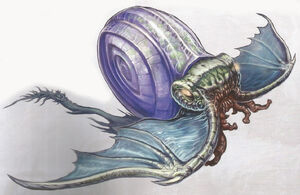 The legacy of a dead race survives concealed within "tainted" cyphers and artifacts as psychic seeds. Victims who use these devices are slowly transformed into massive monsters of slime and hate, partly enclosed in a protective shell. Dubbed "cleoids" by Ninth World explorers, these creatures want revenge against all living things for their genocide.

What cleoids call themselves is a term that's no longer and more ominous, and one that can be conveyed only by telepathic contact. Victims hear this name each time they're psychically attacked by a cleoid, though most fail to appreciate the underlying meaning.[1]

Restoration of the cleoid race; revenge

Immediate; swim a short distance each round

Speed defense as level 4 due to large size; tasks related to insight, detecting falsehoods, and knowledge related to psychic phenomena and psychic engineering as level 8.

A cleoid's main mode of attack is a psychic assault, which it can use against a single foe's mind within short range. The attack inflicts 4 points of Intellect damage (ignores Armor), and a victim must make a second Intellect defense roll or lose its next turn. A creature that would be killed by a cleoid instead falls into a 28-hour coma, during which time the victim is slowly transformed into another cleoid.

Vastly intelligent and filled with hate or other living things, cleoids generally don't design to communicate telepathically with other creatures.

A strange plague afflicts a fishing community. Investigators find that those who succumb to its effects are slowly transformed and finally wake as cleoids.

A tainted cypher or two, such as a mind rejuvenator or life rod, can usually be found near cleoid infestations.[2]