The City of Rust (also known simply as Rust) is a bustling underwater city with more than 10,000 inhabitants, most of which consist of skeane. The city also hosts a variety of humans, a few varjellen, some echryni, octopi, and even vroaordun. 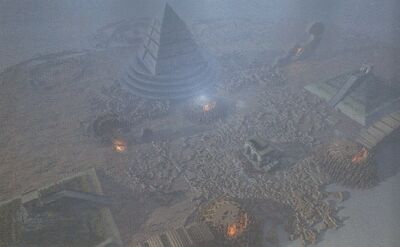 Led by priests called Veds, the city's inhabitants worship, fear, and sacrifice to four volatile and benevolent machine gods, the Four Scylines. Another leader, the Russet, is supposed to be in charge of secular elements of the city, but the current Russet is still young and foolhardy, with her behavior creating a bunch of tension.

Rust contains a number of buildings and tunnels spread out across the ocean floor. A mile or so outside of the main city, in four directions, stand the Four Scylines. Each has its own personality and needs, and much of the city's daily activity goes toward pacifying and placating these giant entities.

The City of Rust is named for the orange metal that forms its main structures, and for the dried-blood hue of the water around it (due to leeching from the aforementioned metal). Once upon a time, the city held another name, but none one alive remembers it. Not even the Book of Scin tells of its name, nor have the gods designed to whisper it aloud these many years.

The city's inhabitants know only the names of their four machine gods, passed down from generation to generation. They've been changed and warped with each new mouth around the words until to most, the names of the powerful have become mere single syllables of what they once were:

These are the Four Scylines. The protectors. The Destroyers.[2]

Rust feels very much like a city torn between gods and monsters. The majority of inhabitants are devout believers in the Four Scylines, but some follow a more secular path, seeking a leader to guide them.

The Veds are five high priests who watch and listen to the gods constantly for signs of displeasure. They currently guide the city in taking the proper actions to keep each god happy, aided by lesser priests known as scyros.

The Veds can "hear" the gods and can communicate with the scyros via their telepathic abilities. They coat their flesh in a waxy hazel substance and wear cloaks made of long metal strips and that they believe increase their telepathic connection to the gods.

There's another ruler who's long vied for power in the city: the Russet. The City of Rust has not always had a Russet, but it has had one for long enough that but a few forget the origins of the post.

The original Russet was Tanress, one of the first humans to arrive in the city long ago. Tanress came as a prisoner, brought in by scyros who found her attempting to injure Ny with machines and hammering devices. Tanress, however, could convince nearly anyone of anything and quickly talked her way not only out of jail, but also into the hearts of those who didn't believe in the power of the Four. She set herself up as the rogue leader of of the settlement, despite protests by the Veds.

Now the current Russet is a human teenager named Thruird, a name that means "third incarnation." She's believed to be the third incarnation of Tanress. When Thruird was born, the entirety of her eyes were a rust-colored hue, a trait shared by the previous tow Russets. She was crowned the leader when she was six days old and has been ruling in one form or another ever since. She wears the Mask of the Will, an artifact passed from one Russet to the next. It shrouds her face in a mask of shifting ice, provides Armor, and allows her to emit a dangerous blast of cold to all targets within short range.

Mostly, Thruird is guided by her trusted advisor Enthum. Enthum is a truly stand-up counselor, urging Thruird toward good, smart choices for the city. Guiding a teenager with a great deal of power is never an easy task, however, and Enthum, for all of her good intentions, usually fails to get the Russet to do much of anything other than scowl, half-burn down the city with her ice armor, and alternate from being the powerful center of attention to crying that she wants to go home to her mother. In light of this, Enthum has begun taking over the leadership role of the city, all in the name of Thruird.

Enthum works closely alongside the Veds, attempting to calm the anger and divisiveness that's been rising between the two factors for so many years. Of course, every time Enthum makes headway of any kind, Thruird does something stupid and knocks the relationship back a step. Thruird is sometimes derisively called "Baby Em" by the people, because her cold abilities remind them of Em's.

Recently, a new group has arrived in the city, and it's beginning to amass followers. This group, which came from a city called Rarrow, call themselves New Theologists. Their stated purpose is to study and catalog deities of the world, attempting to divine whether or not any of them are true gods or goddesses. Having heard about the Four, they found passage on a deep sea ship and came here to study them. So far, they've been denied official access by both the Veds and Enthum. However, the leader of the group, man named Etti Yarem, has developed a relationship with Thruird, and she's granted him permission on the sly. Etti claims to be an Aeon Priest but doesn't have any proof of this. The group is currently gathering the supplies and resources they need to go out and make their first study.[3]

The City of Rust lies deep along the ocean floor. Visitors must take the usual precautions against pressure, cold, and other obstacles to safely arrive at the three circular gatehouses. The city welcomes all who desire to enter it, provided that they don't carry either disease or infection.

In order to access the city, a visitor must pass through either one of the three gatehouses. The gatehouses are complicated structures with a number of porous and semiporous membranes that visitors must walk or swim through to reach the inner city.

Skeane are amphibious creatures, but rather than breathing pure air or water, they enjoy breathing a special oxygen-rich liquid blend they call ooro. Thus, the inner city is filled with neither air nor water, but ooro. When humans and other non-skeane enter the inner city, they might become temporarily water-locked. Their lungs quickly fill with ooro, which their body is unable to process. Within two minutes, oxygen deprivation occurs and shock begins to settle in . Most people's bodies are able to adapt to the liquid air before severe convulsions set in. A few, however, never adapt. Without treatment or assistance, they can suffer more serious consequences, such a s brain injury or even death.

Those who do adapt find that breathing fluid becomes natural, but it also strips their lungs of their protective coating. To avoid getting - and possibly spreading - an infection, visitors are required to drink a fishy-smelling medicine potion called florrine once per day. They can purchase it from the shops in the large building known as the Point. Anyone who's tested by one of the city guards and doesn't come up with traces of florrine in his retinas is quarantined and fined.

A second alternative for visitors is to get an ooroma shot. This infection allows someone to begin breathing the ooro without any risk of becoming water-locked. A large syringe filled with dark green liquid is injected through the chest directly into both lungs, one a time. The procedure is known by those who've had it, and those who give it , as the "lung slug" for its intense feeling that someone just punched the air out of your chest. It's not uncommon for someone to begin the ooroma shot process, get one lung injected, and then change her mind without getting the second one done. A single injection, however, offers no benefit.

Lastly, those who enter into the city for the first time must sit through a short orientation about the Four Scylines. This five minute presentation ensures that visitors know the rules and don't accidentally provoke the gods into action. Once someone has entered the city safely for the first time, he or she is issued a passtag. The passtag shows that she has taken the orientation and is safe to pass undeterred.[4]

The City of Rust spreads its metal rooms and tunnels far and wide across the ocean floor. There doesn't seem to be any rhyme or reason for the locations or shapes of the structures, and their sprawling pattern portrays the sense that they were all part of something much larger at one time. The outlying structures are largely uninhabited and many are still unexplored.

The city also appears to sit atop a much larger surface, one that's not one of the natural world. This bottom layer, which is made of a perfectly smooth stonelike material, extends around the city for nearly a mile in each direction. No sand covers it, a few creatures live upon its surface, and no seaweed or sea urchins build their homes here. The layer is utterly barren. The only place it breaks is around each of the four machine gods.

The main center of the city consists of three large buildings: the Point and two Pikes. Outside lie the Four Scylines.[5]

Someone has stolen a necklace from the Russet. She hasn't even noticed that it's missing, but Enthum has and, on the sly, is asking people to keep an eye out for anyone starting endothermic fires. IT seems the necklace contains a small bit of the Russet's ice abilities and is quite dangerous in the wrong hands.

A visitor named Taisnel recently commissioned a crafter named Ouhu to create an automaton that would serve as a friend and companion. Something went wrong, and the automaton killed Taisnel. City guards will pay well for anyone who can uncover evidence or find Ouhu and the automaton, both of which have been missing since the murder.

A crafter on a scavenging expedition recently came back with tales of another god far out from the city. He claims it's almost identical to Ny, only larger, and it talked to him.

One of Ka's blue tendrils has begun to reach toward the surface. The tendril seems to lengthen every few days, as it it's growing toward an unseen goal.[6]

In the City of Rust, mutations are considered to be physical signs of an infection. Those with discernable mutations who wish to enter the city may be quarantined for days or even weeks.