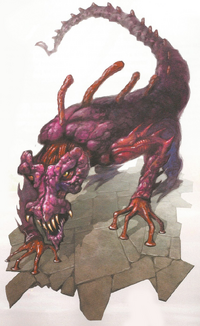 Chirogs are scaly, intelligent abhumans in the Ninth World that despise the numenera.

Chirogs are vaguely reptilian abhumans with thick armor plating covering most of their bodies. They live only to hunt and kill, but despite their savage nature, they're far craftier and more intelligent than most other abhumans. They can comprehend the numenera - and despise it. Even more than killing humans, they enjoy destroying the relics of the past. (Perhaps it's some racial resentment for the wrongs done to them long ago.)

Chirogs tend to live in small packs with a clear leader who's usually a female. In fact, she's likely the mother of many of the members of the pack. The creatures have a tangled, incestuous relationship, and the mature females eventually depart to form a new pack, sometimes taking a brother or two with them.[1]

They dwell in small groups of three to six, usually in either wooded areas or rocky, mountainous regions.

Chirogs don't utilize weaponry or tools, instead attacking usually with a savage bite. However, they can also grapple a foe, which is like a normal attack except instead of inflicting damage, it would hold the victim immobile. The foe can take only purely mental actions or struggle to break free (which would be a difficulty 4 Might task). Both the grappling chirog and the grappled opponent are easier targets for other combatants, so attacks against them are eased by two steps.

About one in three chirogs speaks a human language, likely the Truth. (They all speak a language all their own, which is fairly simplistic.) Chirogs may be spiteful and angry, but not impossible to reason with.

When the PCs finally reach the vault that holds a numenera device that they seek, they suddenly find a band of chirogs already there, ready to destroy it.[2]