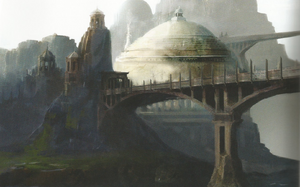 Charmonde is the capital city of the kingdom of Navarene.

Long colonnades. Marble statuary. Monuments to great deeds and important myths and legends. Painted domes. Soaring, arched bridges. Charmonde is a city of architectural beauty and art. The second largest city in Navarene, Charmonde is located on both sides of the Jerribost River, with six bridges connecting the north and south sides of the city.

Charmonde isn't walled, but four fortresses surround it to deter invaders, for the city is the capital of the kingdom and home of the Queen Armalu. Each fortresses has one of four ancient sonic that can create a standing field between them. Anyone who tries to cross the barrier suffers great pain, convulsions, and even death. The Aeon Priests have determined that the unique devices are running low on power, however, and despite all efforts, no one has figured out a way to recharge them. Thus, the four devices are used sparingly. In fact, they've never been activated in the memory of most of the city's current residents.

Charmonde is home to 95,000 people. The queen's palace, Epiternal House, stands atop the highest hill in the city. It's also known as the House of a Thousand Slaves, for rumors say that's exactly the number of slaves the queen uses in the palace alone. Nearby is the Asaranti Univerity, one of the greatest schools in all the Steadfast. Thanks to the university, the city is known for its scholars, philosophers, and artists as much as it is for its marbles and slaves.[1]