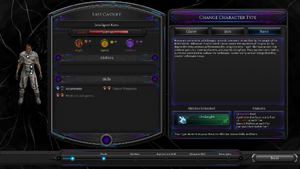 Where Castoffs are made

Character creation in Torment takes place over your stay at the Dark Fathom, following your landing at the Broken Dome. As the Last Castoff, you begin with five points in each of the stat pools (Might, Speed, and Intellect), no skills, no class, and 20 hit points.

The Dark Fathom doubles as a creation phase, allowing you to express your character and define the descriptor and character type. While the game will suggest both once you interact with the mirror, you are free to choose and remake your character afterwards. The steps are defined below:

You first select from the three types available to you. Your choice defines your character's abilities, skills, and stat pools.

The three stat pools determine how you can apply Effort in the various tasks that stand before you in the Ninth World. As stated above:

Every character type has its own, unique set of abilities. During character creation you earn:

You choose various skills to help define your character. Notably:

Descriptors are packages of skills and small bonuses that help set your character apart from others of the same Type. They can be used to maximize your skill potential or earn skills your type normally does not have access to.

And with that, your character is almost complete and you awake at the Broken Dome, after cratering rather severely. The character creation will not be complete for a while, however. To reach the last stage, you need to enter Circus Minor and talk to Casmeen, then fix the clock (see Fallen To Earth) and choose one of three focuses: