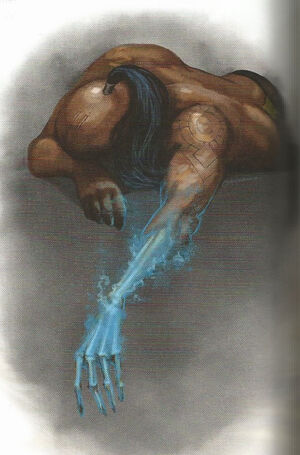 Carnivorous Colors are deadly creatures that change the color of the entities they host and feed off their minds.

When creatures from a dimension where time and space are radically different find their way into more familiar dimensions, they often quickly die. Not so for creatures dubbed carnivorous colors. A room with an eye-opening emerald source of illumination, a splash of brilliant scarlet on a wall, or even a set of familiar clothing that has undergone a spontaneous change in hue from grey to sapphire blue - all these might be signs of an infection by a carnivorous color.[1]

Stealth tasks and attacks as level 5.

A carnivorous color attacks the mind of an intelligent creature within immediate range, inflicting 4 points of Intellect damage (ignoring Armor).

Even when prey realizes that something nearby has taken on a surprising new hue, it's hard to defend against a carnivorous color's actual attack, which is made essentially as if the color was invisible, which is why it makes attacks against most creatures as if level 5.

Attacking a carnivorous color means attacking the object currently hosting the entity. Solid color rarely chooses to fight until the death, and may flee upward as a globe of illumination or seep along a wall or a ceiling like flowing paint. If a host object (or patch of wall or ceiling) is destroyed, the color is disrupted and fades. Unless a weapon using extradimensional energy was used, the color wasn't actually killed, just rendered inactive for several days.

Whenever the color successfully eats the Intellect of a creature, the creature become darker as its color fades. The color gains 3 points of health when it does this , even if the increase puts it above its maximum health.

Interacting with a carnivorous color is very difficult. It doesn't speak or respond to the language of others, and telepathic communication yields no results, as if the creature doesn't exist. But a carnivorous color isn't mindless; it can learn from its experiences and figure out creative solutions to problems.

PCs hear about the sudden death of an entire village from a passing trade caravan. The merchants found every living creature in town, including mounts and livestock, dead. The skin of every corpse was as black as oil, and completely non-reflective, absorbing light.[2]