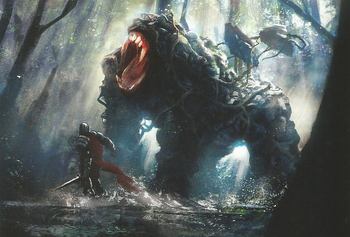 Callerails are large creatures that fuse inorganic and organic material.

A callerail is a creature of fused organic and inorganic substances. Flesh mingles with wood, steel, and stone, as the callerail possess the ability to absorb inorganic matter and adds the material to its body. The creature is a lumbering giant - 15 ft. tall - that walks using its forelimbs as well as its shorter rear legs. Its body is a conglomeration of materials.

A callerial's organic portions remain cohesive so that its circulatory system reaches all areas of its body. It still requires food - in fact, it requires even m,ore food than an ordinary creature of its size. Callerials aren't particularly bright and act on animal instinct in most situations. they reproduce asexually.[1]

Speed defense as level 6 due to size. Breaks objects as level 9. Reacts to deception and trickery as level 5.

A callerail smashes foes with its powerful limbs, and its ability to absorb matter gives it some interesting options. For example, it can heal itself by absorbing matter, particularly large chunks of very sturdy material such as metal or stone. Using this as its action, a callerail heals a number of points equal to the level of the material - around 5 or 6 points for a large piece of either metal or stone.

In addition, a callerail can hold its action until a foe attacks with a weapon. The foe must make a Speed defense roll to avoid having the weapon be absorbed into the creature. Absorbing a weapon heals the callerail for a few points of damage and also negates the attack regardless of whether the Speed defense roll is successful or not. An absorbed weapon would be destroyed.

Reasoning with a hungry callerail is impossible, and they're always hungry. However, a smart character can fool them by setting up a trap, creating a diversion, or using a similar type of tactic.

These predators move into an area and threaten the entire region. Two callerails in the same locale pose a danger to every living thing. The monsters fight to the death, each attempting to absorb inorganic portions of the other and destroying everything that gets in their way.

Sometimes a piece of rare material or even a cypher or an artifact can be found in the wreckage of a callerail corpse.[2]

While a callerail can be found in many places, the Ba-Adenu Forest is known for having large numbers of them.[3]