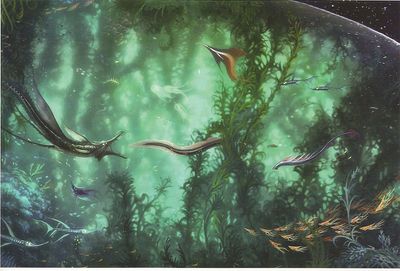 Branu's Kiss (also known simply as "The Kiss") is a sphere of liquid floating in orbit around the sun, close to the ninth world. Within is housed a dense underwater ecosystem which is maintained by an advanced device at the center known as the Crux. A powerful, aquatic android named Branu serves as its Caretaker.

The membrane of the Kiss is highly permeable and the "Water" within is breathable to those who breathe air.

While the true purpose of the Kiss remains a mystery, the environment is tended to by Branu, who protects the welfare of the life inside it, and the Crux, which cleanses the water of toxins and even introducing new life into the Kiss to help stimulate Biological diversity.

The Native races of the Kiss include:

Saunukar: - Smooth humanoids with elongated heads and flippered arms and tails who dwell in family groupings called "Pods" located in villages made from the surrounding foliage. Very knowledgeable about the natural resources of the Kiss.

Humans: - Natives the ninth world who were either refugees or the descendants of refugees cast out from the village of Nebalich through the Line Node and unable to return. Some are adventurers who willingly came through to investigate. Most Ninth Worlders reside in a settlement known as Kestin's Folly

Dramath: - Monsters of translucent shrouds that shimmer with phosphorescent light. They believe they were made to slay a scion named Zalkezia of an alternate Dimension known simply as the Air Castle.[1]