The Braid is a void within the dimension of Reeval that serves as a marketplace for outsiders.

About 3 miles in diameter, the Braid's interior surface is mostly covered in what appears to be simple structures, courtyards with vending stalls, and roadways. Several exit tunnels do exit throughout the Braid, leading to other voids that are scattered across the sphere's interior. At first glance, the area has the aspect of a very large, Earth bazaar.

The humanoid figures encountered among these structures and inhabiting them are revealed to be Thread walkers. Vendor, buyers, and seller (who mostly consist of, but aren't limited to, Thread walkers) are continually active within Braid. In fact, the Braid is just one massive experiment conducted by the Thread to investigate the nature of markets, competition, and the numerous nature of free will as it manifests in such a scenario. All told, the several thousand Thread walkers to be found here can be found one at a time. All of them will cover themselves in some variety of stolen human garment, as well as harvested human skin, as well as harvested human skin, as necessary, in order to give them the shape and appearance of actual people.

Humans can learn to easily discern Thread walkers based on their postures, jerky movements, apparent inability to speak, and an occasional greenish-white glow that leaks from what should be there eyes. The Thread walkers here aren't very good at discerning the difference between themselves and actual human beings as well as other free-willed humanoids that find themselves within the Braid, though it isn't quite impossible for them to take note of any intruders. Depending upon the Thread walker in question, a newly discovered human will either be ignored, apprehended, and dispatched to the Abscission, or in a couple rare cases, dealt with as if just another vendor or buyer within the Braid.

Many of the stalls and stores here will sell the direct fruit of Nibovian Probe results, which can range from the grossly physical to perhaps the incorporeal, including body [parts, objects of any human manufacture, and distilled emotion. In most cases, mute Thread walkers will serve as the vendors. Because Thread walkers are still experimenting with markets and their purpose, they also won't really understand value. Thus, the buyers can literally offer up anything for trade, and it will be accepted. A shin, a finger nail, a cypher, an artifact, a very small rock, a convincing scream of horror, etc.

Visitors can wander around the Braid market and randomly seek out any wares it has to offer, or perhaps any specific personalities residing within it.[1] 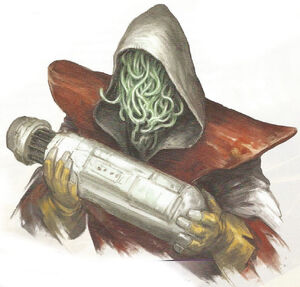 Unlike practically every other stall and/or structure within Braid, this one-story building has a sign out front. The sign will read "Emporium" in the Truth, and within can be found all manner of masks, hoods, automaton parts, tools, weaponry, armor, dried foods, spirits, and the list goes on. Perhaps more incredibly, however, is that the vendor is a Thread walker that's able to speak tanks to a strange boxy artifact that hangs around its neck. The proprietor refers to itself as Ibudan, though it hasn't quite cracked to boundary to self-awareness, it's come very close to it. Ibudan keeps a variety of emotion crystals and potent drugs at hand so that for a period of up to 10 minutes during any given hour, it can come very close to self-consciousness, enough so that it can recognize real humans within its shop. Sometimes, the Farun from the Gyre will sell items that they've scavenged there, and Ibudan won't reveal their presence to the Thread.

Ibudan might possibly see humans less as experimental subjects, and more instead as creatures with inherent value within themselves. It's difficult to be sure. However, working with Ibudan is possibly the best chance that someone who's lost in Reeval has of finding any assistance.[2]

It hasn't escaped the Thread's notice of humanity's desire to seek out food and nourishment as the one thing perhaps more important than emotional attachment, And in accordance with this, a particular, large structure within the Braid market is hung with all manner of dried and smoked meats. Sausage, tubs of lard, steaks, roasts, and hundreds of other preparations. However, only a little exploration of the shop is needed for visitors to discover that, for the most part, human meat is what's for sale. For the most part. a Thread walker known as the Butcher will get its wares from within the Abscission. The Farun that reside within the Gyre have tried to destroy the establishment and kill the Butcher in the past, after apparently 2 attempts to do such a thing, a new establishment, along with a new Thread walker called Butcher, would spring up with a day or so.[3]

Tunnels of about 50 ft. in width lead to other, nearby linked voids, including the Abscission, the Nibovian Development void, and even the Ejection Void. Traffic between these tunnels is composed of a few Thread walkers, as well as some egg-like containers that range from 5 to 15 ft. in diameter that are propelled by the constant swirl of tendrils that comprise the tunnel flooring. For the most part, these containers will ferry what's harvested from the Abscission to the Braid, as well as Probes created from within Nibovian Development to the Ejection Void.[4]