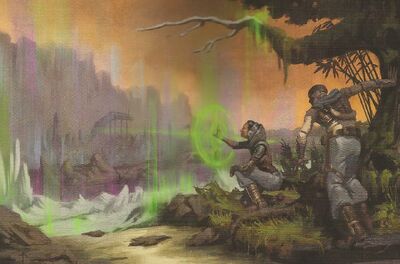 The Banded Bluff is a prominent geological feature in the Ninth World that possesses the fractured layers of alternate dimensions.

Whereas a normal bluff is a geological feature that resembles a broad, rounded cliff (usually also including a long, gradual slope that stretches up to its highest point), the Banded Bluff, in contrast, is afforested bluff that rises from the northwestern edge of the Ba-Adenu Forest that appears, at least from any outsider's perspective, to feature strange illumination, weather, and concentric rings of growth. The residents from the forest refer to it as the Nested Lands, and tell stories about how each band of the rock is actually a separate world.

In reality, each band really is a layer of some other dimension. However, unlike other dimensional phenomena, these specific dimensions aren't hidden behind transdimensional boundaries, and instead, locating and moving between them can be as easy as walking up a normal bluff. On occasion, the band will migrate, so that layers can either change places or fade out entirely while newer dimensional bands are substituted in their place. Each layer will appear hazier and hazier the further back they're layered and some layers are known to be "thinner" or "wider" than how they appear from the outside. In some cases, bits and pieces of other dimensions can cling to travelers, thus causing them to exits in more than one dimension at once.[1]

One of the auditors at the field station believes that some malign influence has affected the other auditors. She seeks any outsiders that are willing to help her understand the contamination.

A particular Professor from the University of Doors will sometimes arrive. None of the on-site auditors have ever met him before, but he does bear the proper credentials. He claims that the field station needs to be shut down and for the auditors to halt their research. Unsurprisingly, some of their number suspect it to be either some kind of trick or a dimensional duplicate.

A parade of ultraterrestrials emanating from some unknown dimensional layer will sometimes march down the bluff and head towards the Clock of Kala, but never return.

Among all the bizarre dimensions within the bluff, one in particular seems to possess intelligence. It will migrate at will and extract explorers from one layer, only to drop them into a another, as if in a playful manner. In addition, sometimes the ghostly laughter of godlike delight will echo down the bluff.[3]

Most of the entities throughout the Banded Bluff can't readily pass between layers like residents from the Ninth World. For them, each layer is an invisible segment of their own, much larger world. The University of Doors auditors presume it's because natives from each dimensional layer exist at their own different dimensional phase. If a dimension walker decided to explore the wider dimension beyond what was accessible within a layer, they would need to figure out how to change their personal phase in order to match.[4]