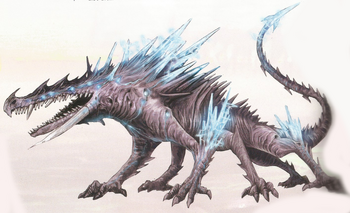 Babirasa are blind predators in the Ninth World that wield electrical powers.

A sharp smell like during a lightning storm, flickering illumination, and a low-pitched grunting heralds the arrival of a pack of babirasa. About 5 ft. tall at the shoulder, these many-legged predators have flesh the color of coal, studded with metallic spines that spark with static. Their long heads contain tusks and many teeth for tearing. Without eyes, babirasa sense their prey and environment with an electric sense that might just actually work better than normal sight. They use that same power source to stun, kill, and perhaps even cook their prey. When they wish to go about quietly, they produce a constant static discharge whose sounds acts to audibly camouflage them.[1]

In packs of 3-6 in forests, low foothills, and even on warm plains

Stealth as level 5, perception as level 6

Babirasa are drawn to living creatures that have a bioelectric field. When they hunt, each babirasa inside a pack is connected to the other in crisscrossing lines of leaping electricity. In any round in which the pack is free to move around, they position themselves so that two or more of their number can surround their prey. Every round, all prey within the immediate range of two or more babirasa automatically take 3 points of damage from the connecting lines of electricity leaping between the babirasa that remain alive and can still move. On a particular babirasa's turn, its tusked bite inflcits 3 points of damage, and on an additional failed Might defense roll, 3 points of damage from electricity.

If a babirasa happens to take advantage from an electrical source, they instead regain health equal to that damage and their tasks are eased on their next turn.

These creatures are clever predators and nothing more.

Packs of babirasa are drawn to installations and other devices that emit copious energy, such as lightning towers, luminous dynamos, or any of the various kinds of turrets. They're also drawn to storms.[2]