The Attic is a large, special chamber seated within the Endless Abode.

A humanoid creature named Viandri operates the Attic, which shifts around the Endless Abode in the same manner as the Quiet House will shift around the Ninth World. However, Viandri controls where and when the Attic will move to, via a mechanism called the Totoris that harnesses the flux storm, among other functions.[1] 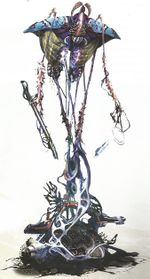 Viandri is an automaton and the sole servitor of those that initiated the Endless Abode's growth thousand or even millions of years ago. The automaton's memory has overflowed with information so many times that it's had to repeatedly dump out the excess and only keep that which seemed vital. Over time, however, it's forgotten what really is vital, and it spends much of its time reclining in a kind of machine dream, but may rouse itself when it detects, by sensors embedded within the Totoris, that newcomers have entered the Endless Abode. Viandri may even see to it that the Attic is moved so that it's within the path of the newcomers. Despite its great age, it still remains curious. It still hopes that one day those who created it will return, and thus allow Viandri to end its vigil. It'll be discovered that the PCs aren't its creators, but will react violently only if attacked first.[2]

This level 9 control mechanism lying at the center of a jumble of other objects and wreckage. In addition to controlling the Attic's location, Viandri can also use the Totoris change the course of other corridors, expand or contract other rooms, or otherwise shuffle them about the Endless Abode like puzzle pieces. But for all the device's power and Viandri's skill, the Endless Abode will always resist this tampering. Should the characters overcome Viandri (or perhaps find it absent from the Attic) and try their hand at the Totoris, even gaining a basic understanding of its function will require a difficulty 7 Intellect task. However, it's possible that lost characters could use the Totoris to create a path back to an exit to the Quiet House, or some other location. Failure, however, will risk drawing the attention of the Hunger in the Halls.[3]