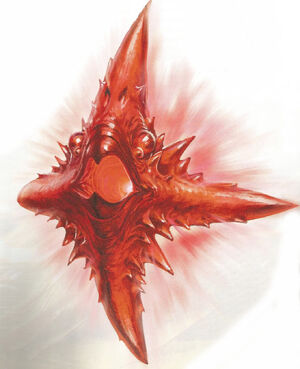 Arravelons are flying, ultraterrestrial creatures that feed on the minds of others.

That distant point of red light might be a star in the sky. Or perhaps a falling star, or a craft fashioned of devices left from a dead civilization. Or, if it continues to grow until it's a blazing point of scarlet fury several feet across, it might be an arravelon come to feed upon all a target's tomorrows, sucking away the victim's probability potential until they narrow down to nothing.[1]

An arravelon can attack one target within immediate range with what appear to be dozens of crawling tendrils of intangible light. A target who fails an Intellect defense task suffers 5 points of Intellect damage (ignores Armor) and experiences an odd sense of narrowing possibilities. Each time the victim takes damage, the difficulty of all its Intellect-based tasks increases by one step. This effect lasts until the arravelon is destroyed.

An arravelon is vulnerable to attacks that use transdimensional energy. If damaged, the creature falters and takes no action for one round, after which it can act normally.

Arravelons don't speak or respond to the language of others, and telepathic communication yields no results, as if the creature doesn't exist. But arravelons aren't mindless; they can learn from experiences and figure out creative solutions to problems.

An inactive arravelon (which appears like a node of reddish crystal) has been set into the ring of a powerful personage. every so often, the arravelon manifests, killing the current wearer, though usually not when anyone else is present. This has given the ring a reputation for being cursed.[2]