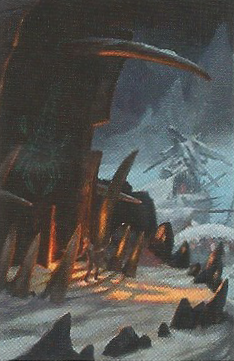 Aras Island is a place located off the coast of Ancuan.

Belonging to no kingdom and bearing the characteristics of no single region, Aras Island stands string as a bastion of independence, murder, and mayhem. While technically located in Ancuan, the island and the kingsom want nothing to do with each other. Resting just beneath the heel of Scorpion's Reach, the mountainous island is covered with snow and ice nearly year-round and has an incredibly harsh climate, thanks to offshore quakes, biting winds, and storms that batter the coastline with giant waves.

The people of Aras are equally harsh. Calling themselves Jaekels - after the giant sea scorpion they worship for its aggressive nature, armored skin, and saw-toothed claws and tails - they revere a bloodthirsty, animalist nature above all things.

Jaekels emulate this belief in their actions and their physical form. Animalist surgery (including grafting, genetic manipulation, and implantation) is common, especially among those ride in on the island's fierce and aggressive water army. It's not unlikely to find Jaekels in various stages of transformation. Bandages and odd healing accouterments are frequent sights, and claws, teeth, horns, and wings are prized body enhancements. Only those with the highest honors in killing and pillaging, known as Araskas and identified by an intricate pattern of blood tattoos, are deemed worthy of having wings of any sort.

Despite their use of body-enhancing technology, Jaekels favor simple, traditional weapons, which they typically steal from their captives. It's been long considered a sign of weakness to use a technological weapon, although that perception is changing, and today you're more likely to see a mix of weapons among Jaekels. With or without weapons, they're still fierce warriors, fighting literally tooth and nail, having turned their bodies into highly specialized killing machines.

Jaekels kidnap scholars, tinkerers, and other numenera workers and bring them back to Aras, where they force their prisoners to create stronger, fiercer animalistic elements. For their experiments, they also capture a wide variety of creatures, including humans and abhumans. Rasters are a special favorite, both for their biomechanical wings and for the sport of capturing them and their riders.

Jaekels build their living, working, and merchant structures from scavenged bits of whatever materials break on the shore of their island. Their boats, however, are another matter, lovingly constructed by an Araska and her crew from the parts of captured and stolen ships. It's considered a great achievment to capture a vessel from an organized group like the Redfleets or Ghan's merchant fleet and dismantle it entirely before turning it into a new Jaekship (or using the parts on a ship already in progress).[1]