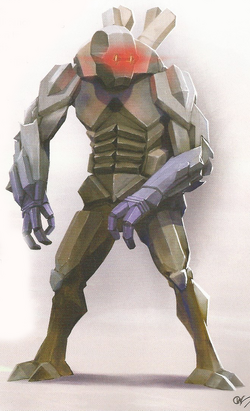 Anhedons are constructs within the Ninth World that are drawn to an unknown location.

Dour and severe, anhedons are protected with a carapace of dark stone breached only by twin beams of red light for eyes. It's possible that anhedons are actually wearing some kind of geologically powered armor, but that's mere speculation. Anhedons retain that mystery because they seem to simply fall out of the sky in a never-ending search for something they call the "Meeting of All Things".[1]

Find the Meeting of All Things

Almost anywhere, alone or in groups of three

Anhedons have the ability to manipulate gravity, both to make attacks and also to evade foes. A favorite attack of theirs is to greatly increase their own gravity after leaping up under a lesser pull, allowing them to smash back down, inflicting 4 points of damage on all targets caught underneath or in the immediate area. Their control over both gravity and mass renders them immune from taking falling damage themselves.

They can also target one individual within short distance, netting them inside a field of crushing gravity that pulls them to the ground, prevents them from taking physical actions, and inflicts 4 points of damage each round until the target can escape.

An anhedon can cancel gravity for a target within short range, which would then cause the victim to float around like a feather in the wind until they can escape, or they can simply reverse gravity for one target long enough - less than a round - to send them falling 100 ft. into the air. The target will fall back to the ground (unless they can somehow prevent it), taking 10 points of damage and descending one step on the damage track.

Anhedons appear to be a hateful group and would rather kill others than deal with them in their never-ending search for the Meeting of All Things - a thing they will name but never describe. They speak several languages and will negotiate with those who seem they could help. But woe to any who lie about knowing where to find what the anhedons seek.

The PCs discover partial and incomplete plans for something called an anhedon compass. This eventually draws the attention of anhedons, who want it.

Anhedon geologically powered armor can be salvaged for a couple of cyphers and two or three iotum.[2]