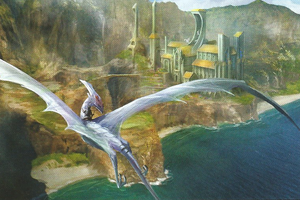 The Angulan Knights are an organization in the Steadfast who strive to ensure justice for all, regardless of nationality, social class, or beliefs.

Humanity has once again granted dominion of the well-used and often misused Earth. The Ninth World is the Last World. We shall call it Midgard and defend it in the name of humanity. These are the aspects of the world that stand in the way of humanity's dominion: creatures from elsewhere, predatory horrors lingering from a nonhuman past, humans that have turned on their own kind by committing crimes against their own kind, and any who prevent the greater good anywhere. These aspects of the world shall be eliminated by sword or flame, in the name of Midgard and the spirit of Angule.

Throughout the Steadfast, justice is sometimes meted at the end of a blade unaligned with any king or prince. The Angulan Knights are an order dedicated to the advancement of humanity as a species. They not only ignore governments, class distinctions, and religious differences, they abhor those things. Angulan knights feel empowered to right wrongs, pass judgments, and see justice done, and few stand in their way.

A woman named Angule founded the order more than 350 years ago, and her teachings have spread such that at least 800 knights now roam the Steadfast. More than a century ago, the knights made a pact with Thuqera, known as the Great Drake, whom all xi-drakes revere. Today, the knighthood and the xi-drakes work together in their duties.

The Angulan Knights have no centralized leadership.Instead, members advance through a series of thirteen ranks until they achieve the title of Grand Knight, the highest one can rise. There isn't a limit to the number of Grand Knights the order can have. The ranks are: Red Devotee, Blue Devotee, Black Devotee, Knight Seeker, Knight Avenger, Knight Defender, Knight Marshall, Knight Justice, Knight Commander, Master Knight, Knight Consul, Lord Knight, and finally Grand Knight.

The knights have the blessing and support of the Order of Truth, and even Aeon Priests outside the order give them respect and aid if need be. However, the knights, true to their charter, don't afford the priests any special treatment. Many people mistakenly believe that the two groups are officially related or that the knighthood answers to the Amber Pope, but neither is true. Once inducted into the knighthood in the Sanctuary of the Eye within the Sea Kingdom of Ghan, the order's central base of operations, a knight is charged to go out into the world and enforce the charter.

Angulans typically despise mutants in any form and swiftly root them out, putting them to the sword. They don't care for visitants, either, but suffer them to live if the creatures don't directly oppose the knights.[1]

Angulan Knights could be encountered almost anywhere, pursuing their quests. But they're always found in Ledon, in the Sanctuary of the Eye. And anyone who enters there is likely to interact early and often with Castellan Vinabas.

Whipcord thin and tall despite his grey hair and lined visage, Castellan Vinabas (who holds the rank of Grand Knight, in addition to his role in the citadel), sees to details both minor and crucial within the Sanctuary of the Eye. That includes interviewing important visitors, whether they be potential members or those suspected of being secretly in league with mutants. Though he's a fair man, Vinabas won't violate his code when it comes to seeing that the Angulan philosophy is carried out.

Crossed swords on a field of green, red, and yellow

After passing through all the proper initiations to become a Red Devotee, a member of the knighthood can choose to gain a special +1 bonus to damage when they feel as though their combat is working toward upholding the charter. (The player and the GM can decided whether a particular situation warrants the bonus.) This ability must be chosen in lieu of a new skill.[2]